It is no wonder then that such a soulful city would have a delectably rich tradition of cuisine – from steaming kachoris and jalebis to refreshing lassi and thandais.

With a wide variety of street food available in every flavor known to man, be it spicy, sweet, tangy or even the mix of all, We have come to conclude that street food is at its authentic best in Banaras. We assert this fact with such conviction after being disappointed with several places in the country claiming to serve Banarasi food; they never quite get it right.

Chaotic gullies, vehicle logjams, rituals, culture, tradition, gossip circles by the shore of the Ganges and more. We guess words are not adequate for describing the world’s oldest living city – Varanasi (aka Banaras aka Kashi). Banaras isn't just a city; it's an experience. 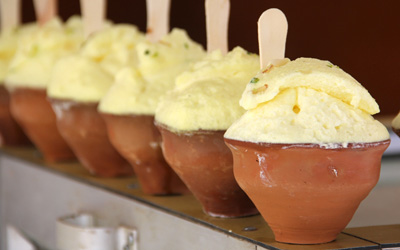 Go to them in the morning and ask for Malaiya. It is a froth of milk made by allowing the milk to play with the dewdrops overnight. It looks very heavy but is extremely light. If you miss it try the lassi that is also served in Kulhads – with extra toppings of Malai, pistachios, Kesar and many other flavors.

Ladoos and Pedas can be found outside every temple – sold as prasad to be offered to deities but you can always buy some to taste.